Dan is a Commercial Pilot and FAA Certified Flight Instructor (CFI/CFI-I), and a multi-media and branding professional. He has served in various roles as a volunteer first responder ranging from Operations Manager for a disaster response agency, to being deployed to a disaster zone with the American Red Cross. Dan’s commitment to safety, accessible education, and public service is a driving force in everything he does.

Dan has worn many different hats ranging vastly from teaching new pilots how to fly to consulting for the Arizona State Board of Education about changing policy and standards. Prior to becoming a pilot, some of his work has included digital security consulting for various clients, working with tactical and government agencies, public speaking, and more. With family support Dan worked on a litany of projects before starting his career, some of which led to becoming a published poet at age 11, accepted to compete in a Honeywell science innovation competition with his invention “Bird-B-Gone”, and shortly after, As the youngest filmmaker to compete in the first Peoria Film Festival, Dan has three films accepted to show in 2008.

Shortly after, Dan became an Intern for the City of Peoria’s Communications Department and worked with the City Council, TV Station (Channel 11), and other departments within the City. During his career with many diverse experiences, Dan has had the pleasure of working with many dignitaries, elected officials, and well known figures like Secretary of the United States Air Force Barbara Barrett, Muhammad Ali, Senator John McCain, Emmy Award Winning Actor Bill Oberst Jr., Supreme Court Justice Sandra Day O’Connor, and more. From 2019-2021 Dan was involved with Companion Pets in Crisis (CPiC, a 501(c)(3) non-profit. His experience working with municipalities, tactical and fire/medical departments, and with various government agencies helped him in successfully securing new government and private sector partnerships, funding, donations, and driving volunteer engagement. Dan quickly progressed through the ranks of CPiC first as a first responder, then Public Information Officer, and finally Operations Manager when he resigned at the end of his term in July 2021.

Dan has since worked with animal rescues around the country on a volunteer basis doing animal behavior training, rescuing, and animal rehabilitation.  Additionally, he has spoken many times to audiences of young minds between the ages of 11-18 years old about animal rescue and disaster response, as well as other topics like business, media, and marketing. Dan was involved as a mentor with STEM based education groups such as the Chief Science Officers (Scottsdale, AZ). Dan is conversational in German, and has had the privilege of giving lectures at both high-schools and private universities in both Austria and Germany.

After graduating high-school and college shortly after with an Associate in Applied Science Degree, Dan served on the Board of Directors for AC4GC, a non-profit corporation located in Phoenix, Arizona devoted to preserving and promoting Germanic cultures. An interest in health and fitness related to his being struck by lightning prompted him to serve as a Director on the Board of Directors for the New Life Society, a 501(c)(3) non-profit corporation which provided support and educational services for organ and tissue transplant recipients and donor families after the completion of his term as a Director for AC4GC. His newfound passion for health and wellness led him to become a nationally certified personal trainer in 2017. Additionally, this personal training and experience helped Dan to be cast in the 2018 season of American Ninja Warrior, on which he competed in the Jurassic World Night. Dan has served in a variety of first response roles, many of which combined all these skills sets; most notably, Dan was a volunteer Disaster Responder (DAT Team) with the American Red Cross on both a local and national level. In this volunteer role, he accepted a deployment to a Disaster Zone to assist in response efforts.

• In January 2020, Dan Was Nominated, And Then Subsequently Chosen As A Finalist, for the Luke Air Force Base’s “Luke Days Hometown Hero Flight”. According to Luke.Af.Mil, “The Hometown Hero program allows the public to nominate outstanding citizens to receive a familiarization flight in an F-16. This flight allows us to showcase Arizona citizens doing amazing things in their communities, paralleling the amazing efforts put forth by Luke Airmen every day.” 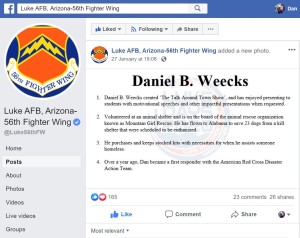 • At the beginning of 2020, Dan accepted a job instructing at one of Arizona’s top flight academies. Dan was initially standardized to instruct as a Part 141 instructor for the Chinese, Vietnamese, and Korean ab initio programs, however transitioned to instruct for the school’s Part 61 “Pathways Program” teaching domestic airline cadets how to fly!

Below is a brief sampling of projects produced and/or directed by Dan Weecks. For a more complete filmography through 2016, please visit Dan’s IMDB page.

Live from the Red Carpet – TE

The Heart of Rescue

Something Came Around OFFICIAL MUSIC VIDEO