Ever have one of those days you crawl out of bed after snoozing your alarm 5 times, brush your teeth (possibly forgetting the toothpaste), stumble into your office and sit down to a gigantic stack of paperwork?  No?  Ok, how about this one;  you hit the gym hard for a few days and don’t see immediate gains so you give up.  It doesn’t really matter the situation, we all have things to get done and sometimes lack the motivation.  That very reason is why GOALS are so important!

Planning for your future, short term or long, regardless of what it is, is a goal.  I’ll admit, I’ve had my fair share of those days where I don’t want to get up or go to the gym but I force myself to which is how I know first hand how much the rest of the day can drag.  I came up with my own way of getting things done even when I temporarily lacked motivation which I wrote about on my old blog in the article “Motivation is temporary, inspiration is permanent”.  Rather than just re-stating what I already wrote, I want to give an example in this post. 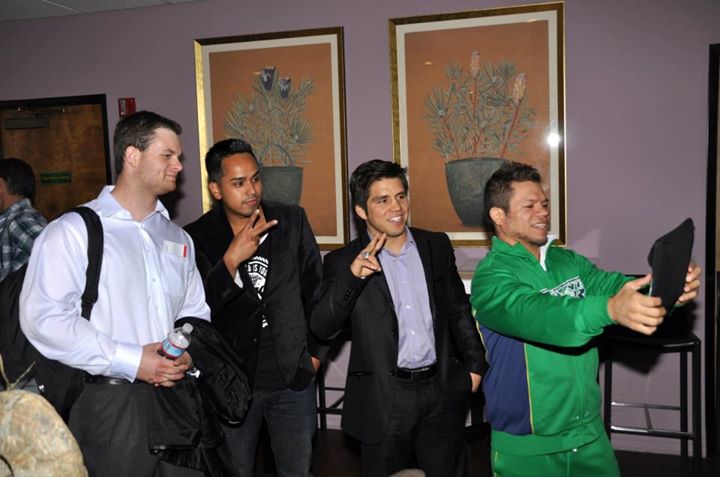 As the ol’ blog title says, motivation is temporary and inspiration is permanent.  In the example I used previously, my friend Henry Cejudo (who most of you know as either the 2008 Olympic Wrestling Gold Medalist or the UFC Flyweight and Bantamweight Champion) is definitely motivated, but more importantly he is inspired.  Sure, he won an Olympic Gold and made his MMA debut against Michael Poe (great fight… I had a ringside view) which took a lot of motivation, but the work nobody sees come off camera where his inspiration is apparent.

I’ve had the pleasure of accompanying Henry to classrooms to talk to middle school kids, to a local theater troupe to watch the young actors and actresses tell Henry’s childhood story, behind-the-scenes at the Tonight Show with Jay Leno, and much more.  Henry does all these things to help today’s youth and his community (inspiration) which provides motivation to get in the ring and get punched in the face… well, he mostly does the punching as one of the greatest combat athletes of all time.  Regardless, Henry is a star who’s worked tirelessly his whole life to get to where he is now.  At this point you’re probably thinking, “I don’t wrestle or fight, I just want to know how to get my boss to notice me so I get that promotion.”

It doesn’t matter what work you do or what your goals are, your frame of mind is the key to your success.  Inspiration is the best motivator and will probably come when you least expect it.  Until then though you should find motivation for everything you do and if you can’t, fake it until you make it (it works, Amy Cuddy proved it on TED).  For example, my friend Scott Amiot has had an incredibly interesting career doing everything from marketing for Facebook to being a Pest & Weed Control specialist which is his current job…. he’s one of the best in Arizona. At the time of this writing, Scott’s on a month long road trip through western Europe vacationing with his family.  If you talk to him about the career change, he’s the first to admit being self employed is crazy and scary but definitely worth it in the end; this is because he’s found the motivation for everything he does and is inspired by helping people rid their lives of those pesky pests.

You should think of your goals and challenges like a mountain range, in this case the Swiss Alps where Scott and his daughter are spending time.  When you first come up with your goal, let’s say getting a promotion, you may not realize all the work involved in achieving the goal.  You may put off starting the necessary steps for a while but when you decide to take yourself seriously your goal seems forever in the distance like picture 1 in the set below (vacation pictures taken by Scott).  You start with the little things like returning emails early in the morning and making it into the office on time but eventually the tasks become daunting and much harder like picture 2.  When you’re faced with something like doubling your productivity or saving the Johnson account the challenges can seem impossible to conquer.  However always try to find the positive in every situation.  When you’re in the thick of the problem, you might notice a beautiful flower or the crystal clear stream in picture 2.  If you fail at the climb and roll down to the bottom of the hill, the good news is there’s always another way. The mountain isn’t going anywhere so you can try again and again until you succeed.  Once you successfully complete the task at hand you’ll realize it wasn’t nearly as difficult as you though, or maybe it was but you’re stronger for getting through it.  Picture 3 is a perfect example of how it should be after each successful step towards your ultimate goal; you should appreciate the beauty in doing something beneficial but realize there’s still many more challenges in your path.  Some will be small while others will be monumental.  Nonetheless, you made it over that first hill and that’s what’s important.  If you’re lacking the motivation to climb the next mountain, repeat steps 1-3 anyway and you’ll get to the top eventually.